The NSW-based stable of Robbie and KerryAnn Morris plan to be big players across the TAB Queensland Summer Harness Racing Season and they have started in perfect fashion.

The Morris-prepared Takingcareofbusiness was a stylish winner of the opening heat of the 2022 edition of the Group 2 Peak Of The Creek series on Thursday night and looms to be tough to hold out in Saturday’s decider.

The unique Peak Of The Creek format – which is being run for the second time this year – consists of heats being contested two nights prior to the Final, with connections then able to select their own barrier based on individual horse times run in the heats.

With Takingcareofbusiness the fastest qualifier of the two heats – edging out Future Assured narrowly – the visitors to the Sunshine State selected the one alley for Saturday’s Final.

The young bay colt is listed in wife KerryAnn Morris’ name as the trainer, with regular driver Robbie explaining the stable decided to bypass races at Menangle for him and instead head to Queensland.

“He is a really nice colt and we have a fair opinion of him,” Robbie said.

“The series sort of lobbed in really good, he could have stayed here at Menangle but we thought the prize money with the heat and the Final looked great.

“We always thought he would get better as he has followed a lot of good horses in Sydney and come of their backs and beat them.

The stable have regularly campaigned horses in Queensland over the years – highlighted by Aztec Bromac – but have not been regular visitors since.

Through the Morris’ connection with the champion stable of the Dixon clan, they plan to be frequent visitors north of the border across the back end of 2022.

“We will look to send a couple more up later in the carnival,” Robbie said.

“We will see how it goes and take it week by week.

“We are very lucky to be able to have these horses stay with Trista and Grant Dixon if they are to head up.”

In the opening heat over 1660 metres, Takingcareofbusiness toughed it out behind the urgings of leading reinsman Nathan Dawson to get the better of Shane Graham’s recent stable acquisition, Mossdale Mac.

With Dawson to partner Shawn Grimsey’s Speed Dating in the Final, the Morris’ have turned to Adam Sanderson.

The son of The Gold Ace has made a promising start to his tenure as a race horse, winning six from 11 to go with two other minor placings.

“He has got really good gate speed and he has only ever made one mistake in his life and that was my fault not his,” Robbie said.

“He sails around any track and is a beautifully gaited horse.

“He has a lovely bunch of owners that are good people.”

Driven and trained by Trent Dawson, Future Assured will start from barrier two after running the second fastest time in Thursday’s heats.

Uncle Shank – for the leading combination of Pete McMullen and Chantal Turpin – took out the first edition of the Peak of The Creek last year.

Also, on the program on Saturday evening will be the Be Good Johnny Sprint at Group 3 level, the Listed Queen Of The Creek as well as a Group 3 Trotting Feature. 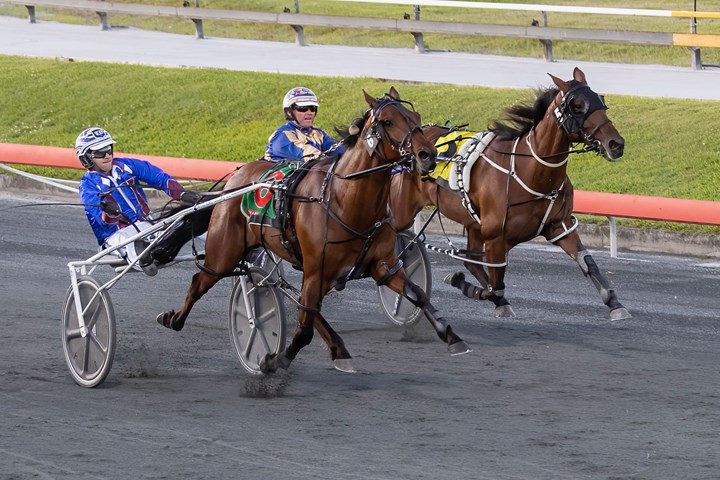