The opening leg of the 2021 Australian Pacing Gold Grand Circuit was dominated by Victorian pin-up pacer Lochinvar Art when he accounted for his rivals in the Gr.1 $500,000 Del-Re National A.G. Hunter Cup at TABCORP Park, Melton tonight (Saturday).

Boasting brilliant recent form with victories at his past five starts, the David Moran trained and driven entire was sent off at unbackable odds ($1.30) before scoring easily from the Belinda McCarthy trained duo of Alta Orlando ($36.80) and King Of Swing ($5.60).

In many ways, the race was billed as a match race between the local ace Lochinvar Art and defending Hunter Cup champion King Of Swing with both facing second line draws but the expectations fell flat when Moran confidently guided his burgeoning star to the lead within the first lap of the 2760m mobile start feature.

It was at that point; the race was effectively over.

With the weight of an entire state on his back, Lochinvar Art was untroubled thereafter.

The lead time was covered in a comfortable 83.7 seconds.

Settling closer to last soon after the start, King Of Swing looped the field three-wide to sit parked outside his arch-rival as the field passed the mile marker.

With the two favourites dictating the tempo, rivals were not prepared to make any moves.

The first half of the final mile was covered in splits of 29.9 and 30.1 seconds.

Entering the backstraight for the final time, Moran released the brakes on his gun five-year-old and quickly had his rivals off the bit with a brilliant 26.2 second third quarter split.

Lochinvar Art started to move clear as Alta Orlando briefly loomed as a threat while King Of Swing battled hard to stay in touch.

In the straight, Lochinvar Art raced clear with Moran barely moving aside from giving the big crowd a big whip flourish as they combined for the seventh Gr.1 victory.

The final section was timed in a swift 27 seconds.

Lochinvar Art scored by 6.4 metres from Alta Orlando with King Of Swing a further 3m away in third.

The overall time was 3:16.9 with the winning mile rate posted at 1:54.8 – well outside of the track and race record held by Tiger Tara at 1:53.2 when successful in this race two years earlier.

Lochinvar Art is raced by Kevin Gordon who described the winning moment as a “Dream come true”.

The Modern Art – Ponder In Paris entire takes his record to 28 victories from 50 starts while his earnings are well past $1 million.

The next major target for Lochinvar Art will be the next leg of the APG Grand Circuit, the $1 million Ainsworth Miracle Mile at TABCORP Park, Menangle on March 6. 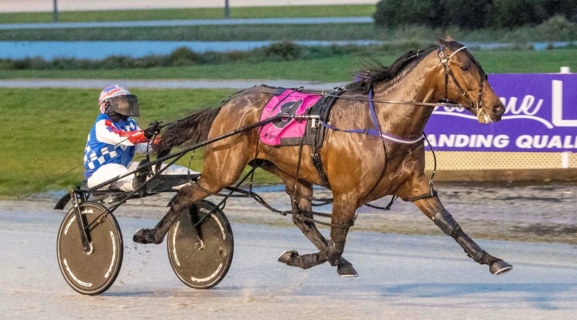 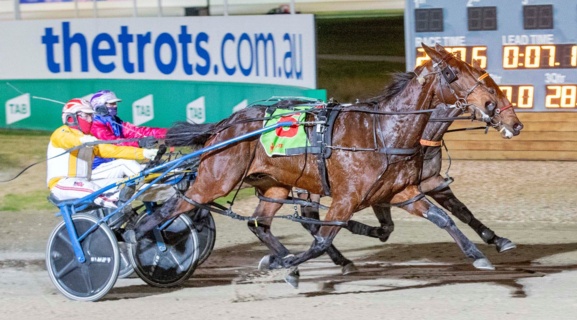