Connections of 2016 Victorian Horse of the Year Lennytheshark.

The horse who has captivated a nation attracted the audience’s applause one more time when Lennytheshark was crowned Victorian Horse of the Year.

The award was reward for Lennytheshark’s outstanding 2015-16, in which his successes included winning the Perth Inter Dominion and Good Form Victoria Cup, in addition to second placings in the Miracle Mile and Len Smith Mile.

“It’s quite humbling to be up here,” part-owner Martin Riseley said. “The horse has done a fantastic job.

“After the season, you have a look at the horses who have gone before and won these awards and it really puts it into context how special it is.”

Gammalite, Popular Alm, Shakamaker and Sokyola are but some of the superstars of the trots whose company Lennytheshark rightly shares, having on the night also officially received the Harness Racing Australia Horse of the Year award.

“It’s an absolute credit to the whole team that goes behind Lenny,” Mr Riseley said. “The way that David (Aiken) and the whole Aiken team manage him from the time he spends in the water walker to our vet Simon Robinson, Patrick Ryan when the horse was coming back – he spent I don’t know how many kms just walking – and the whole team has just put in an awesome effort.”

And it’s also a family affair, not only for the owning father-and-son, but for many who have been adopted into the wider Lennytheshark family.

“It’s not only our immediate family, staff at our work, cousins, distant cousins who you don’t even know come out of the woodwork. I went to Flemington races yesterday, I was on the bus and someone wanted to come up and talk about Lenny with me who I didn’t even know. It’s just fantastic and we all enjoy it.”

Lennytheshark, who will soon head to Perth to defend his crown, won the honour ahead of fellow Victorian Horse of the Year nominees Ideal For Real, Rocknroll Magic and Keystone Del.

The winners of the horse of the year categories were as follows:

Two-year-old pacing colt and gelding: The Storm Inside (Emma Stewart) 11 August 2022
McMullen siblings to represent Queensland at Australian Drivers' Championship series
The leading metropolitan driver this season and a recently minted Group 1 champion will don the maroon colours and represent the Sunshine State at next month‘s Australian Drivers' Championship series in Adelaide. The reinsman known as “Leader Pete”, Pete McMullen, has been selected... 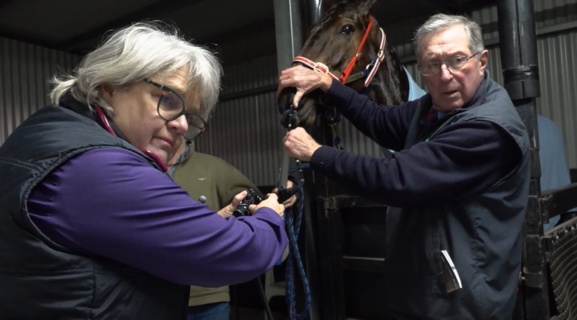 11 August 2022
WATCH: Go behind the scenes with Victoria's race night vets
Take a close look behind the scenes at a harness racing meeting with exclusive access courtesy of Harness Racing Victoria's vets during a metropolitan meeting. In a special feature for The HRV Hero Show, veterinarian Lesley Hawson provides insights into their race night duties, including swabs and endoscopies,...

11 August 2022
International flavour at festival of harness racing in Wales
Identities from Australia and North America will be attending the annual Vincent Delaney Memorial Irish Festival of Harness Racing at Tir Prince Raceway in North Wales on Saturday and Sunday. The ‘VDM’ is the brainchild of Irish brothers and business partners Derek and James Delaney, who... 11 August 2022
Another milestone for Callaghan
Top young driver Jack Callaghan has had a major year in the sulky that was topped off with yet another milestone on the weekend. The 20-year-old reinsman won on the Michael Doltoff-trained Promiseland at Penrith last Sunday giving him his 400th winner. Callaghan has only been driving for five seasons... 11 August 2022
Jack adds another top mare to his team
The depth of the pool of open class of mares in New South Wales has never been stronger. The inclusion of Group 1 winning mare Jeradas Delight who recently joined the Jack Trainor stable and the return of Bathurst mare Ballerini from a campaign in Queensland has only bolstered the ranks. Jeradas Delight...