Inexperienced youngster Swingband made a sensational debut with a runaway victory at Pinjarra on Monday afternoon, and he looms large as the two-year-old to beat in the $125,000 Choices Flooring Golden Slipper at Gloucester Park on Friday night.

Prepared by Baskerville trainer Ryan Bell, Swingband has drawn the prized No. 1 barrier in the group 1 classic, and Chris Voak, last season’s leading driver in Western Australia, has been engaged to handle the gelding, with Aiden de Campo committed to drive one of his three runners in the 2130m event.

De Campo drove Swingband in a 1684m event at Pinjarra on Monday when the Alta Christiano gelding was untroubled to set a fast pace and score an effortless win by five lengths over Torrevean Amy, rating 1.54.2 after flying through the 400m sections in 27.7sec., 29.1sec., 29sec. and 28.3sec.

“I didn’t expect Swingband to be at the races at this stage,” Bell admitted. “But he’s that good. He has put his hand up and is very professional. I think he could be the real deal in the future.

“I knew he had a bit of a motor, and he won untouched and ran the times at Pinjarra. Aiden gave him a bit of a wrap, which was good. He held up quite comfortably from barrier one, so I’m confident he will hold up again on Friday night. I know he is inexperienced, but he has good manners and is good gaited.”

Bell holds a powerful hand in Friday night’s big race in which he will also be represented by the talented Whataretheodds, who has had nine starts for four wins and three seconds. Whataretheodds, a $25,000 yearling, will again have the services of outstanding young reinsman Michael Grantham, and is handily drawn at barrier three on the front line.

“It’s good to have a two-pronged attack,” said Bell. “They have drawn well, though it is a bit trickier for Whataretheodds from barrier three, with the smart Tricky Miki drawn in the middle of our two runners.

“I’ll be looking for both my horses holding a forward position. We won’t be driving Whataretheodds any different. We will be driving him how he has been successful. He has run his best races by rolling along. He has given every indication at home that he has improved since he finished second to Rock On Top in the Westbred Classic last Friday week.”

Whateretheodds started from the No. 2 barrier in the Westbred Classic when he raced without cover for the first 1000m before taking the lead --- and being overhauled by Rock On Top with 100m to travel.

Rock On Top was ordered back to trials after winning the Westbred Classic in which he hung out. He performed satisfactorily when he won a trial by more than four lengths at Pinjarra on Wednesday of last week.

“I didn’t do much with him in the trial, but he got home good,” said de Campo. “From the wide barrier he will go back at the start, and I will be relying on his strong finish. His best asset is his speed.”

De Campo said that he was sure that The Miki Taker and Floewriter were capable of strong showings. “The Miki Taker’s work this morning (Tuesday) showed that he is back to his best and I expect him to improve a lot from his latest run,” he said. “I think he is back to what he did when he won the Pearl two starts ago.

“Floewriter will be improved as well. If the speed is on, he has a good half and a good quarter in him. It is a really good race with many chances.”

Considerable interest will surround the Australian debut of Youre So Fine, the only New Zealand-bred runner in the race who will start from the No. 5 barrier for champion trainer Gary Hall snr.

Gary Hall jnr will drive Your So Fine in preference to the Justin Prentice-trained Tricky Miki, a colt he has driven in his three starts for an easy Pinjarra win, a second to Paul Edward at Pinjarra and a fast-finishing third in the Westbred Classic.

Prentice will drive Tricky Miki from his favourable No. 2 barrier, and he is hoping to repeat his effort of last year when he trained and drove $31.20 outsider Mighty Ronaldo, who charged home from ninth at the 400m to win the Slipper from Give Us A Wave and Robbie Rocket.

“The trial was good, and we will know a lot more about him after Friday,” said Hall jnr. “He is pretty laid back which is a good thing. I used him off the gate and he came back to me nicely.”

Youre So Fine won once from three New Zealand starts. His latest appearance was in the group 1 $100,000 Two-Year-Old Emerald over 1609m at Cambridge on Sunday June 6 when he was seventh at the bell and forged forward, out three wide, to take a narrow lead 350m from home before wilting to finish fifth, eleven lengths behind the brilliant Bettors Delight gelding Akuta, who covered the metric mile in 1.54.7. Youre So Fine’s performance was full of merit.

Youre So Fine impressed with an easy victory at his previous outing when he defeated the favourite Franco Indie by two lengths, rating 1.56.7 over 2200m in the group 2 Diamond Creek Farm Classic at Invercargill on May 2. He was in fifth place, three back on the pegs, at the bell, and was third on the home turn before finishing strongly, three wide, to burst to the front in the final 50m. The final 800m was covered in 57.7sec.

This win followed Youre So Fine’s excellent debut when he was beaten a length when third behind Akuta in the group 3 Kindergarten Stakes over 1609m at Wyndham on April 1. He enjoyed an ideal passage, one-out and one-back, before finishing determinedly. 26 September 2021
Duggan chasing 30th Tasmanian Sires' Stakes victory
Hall of Fame reinsman Ricky Duggan will be chasing his 30th Tasmanian Sires’ Stakes Final win when he heads to Devonport on Sunday. Duggan has drives in the two four-year-old finals, the Group 2 Maxfield Drilling Raider Stakes for the Entires and Geldings, while the mares will strut their stuff... 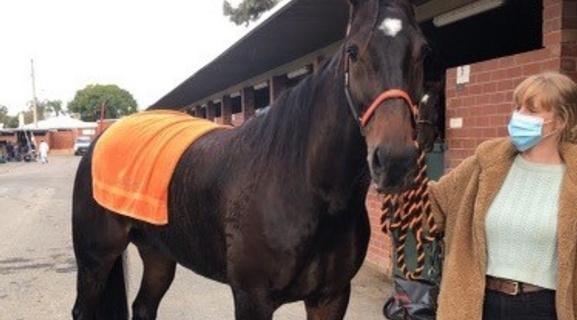 25 September 2021
Trots Centre: This Lad seems to be getting better with age
A severe setback as a three-year-old hasn’t quashed the guts and determination of the Barker family’s “superstar” Creative Lad, who just continues to shine as he moves into the twilight of his career. The 137-start veteran’s journey has been a rocky one, with a mystery issue... 25 September 2021
Ignatius gets a taste of metropolitan racing
GROUP 1 winning pacer Ignatius is being prepared for an interstate raid. Trainer-driver James Rattray has the Victoria Cup earmarked for his talented pacer and tonight’s result at Menangle will determine if Ignatius is sent south for the Grand Circuit feature. With racing in New South Wale under... 25 September 2021
McCall has his options covered
ACE Menangle trainer-driver Darren McCall will be hoping he has most ‘options’ covered with a double-barrelled shot at tonight’s $17,340 Harness Breeders NSW Pink Diamond Stakes at Tabcorp Park Menangle. McCall will handle the classy Girl From Oz, who has drawn gate two, while Chris... 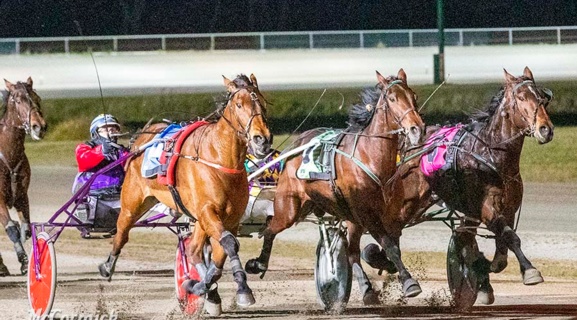