To put it bluntly, the 2019/20 Australian Pacing Gold Trotting Masters season was ravaged.

The COVID-19 global pandemic claimed the final two legs of the season with the Auckland features leaving the season short, only four of the six trotting features were held.

But rather focusing on the negative, let’s focus on the positives.

The opening leg of the APG Trotting Masters is the Gr.1 $300,000 Airpark Canterbury Dominion staged at Addington during Cup week in November, the 3200m stand-start feature is the biggest trotting event on the New Zealand calendar.

With a field of 15 listed to start, the richly talented Oscar Bonavena representing the All-Stars operation of Mark Purdon and Natalie Rasmussen was the punters elect but a crucial break soon after the start cost him any winning chance.

Orange became the first driver since Anthony Butt to complete the Cup/Dominion double in the same week after Butt triumphed with Flashing Red and Mountbatten back in 2007.

And the victory provided Nairn with his third winner of the Dominion after previous victories with Call Me Now (1995) and Stig (2008).

The next leg of the Trotting Masters was held in the north, the Gr.1 $150,000 HR Fisken & Sons Inter Dominion at Alexandra Park, Auckland and the All-Stars operation were chasing feature race glory.

After missing out with Oscar Bonavena in the Dominion, the stable had an excellent chance in the shape of Winterfell in the 2700m mobile start feature.

Beginning nicely from gate two, Purdon allowed Winterfell to stride freely at the start but was unable to match the flying strides of Majestic Man who crossed to the marker line and rather than sitting in the pocket spot, Purdon kept Winterfell moving forward and reclaimed the premier position passing the 2100m marker.

In a driving finish, Winterfell held off the efforts of Majestic Man and Massive Metro to score in a time of 3:21.6 – the mile rate was 2:00.1.

The victory provided Purdon with his sixth Inter Dominion Trotters Grand Final after scoring previously with the likes of Pride Of Petite (x 2), Buster Hanover and I Can Doosit (x 2).

Action then headed across the ditch with Melbourne hosting the next two legs of the season and the Gr.1 $250,000 What The Hill Great Southern Star at TABCORP Park, Melton.

With Kiwi star Oscar Bonavena starting favourite, locally trained hero Tornado Valley was seeking to claim another feature and make amends for the previous season when he was deemed to be a scratching when favourite for the event.

Making full use of his prime draw, Tornado Valley sped to the lead in the 2760m mobile start feature and his rivals were left to play catch-up thereafter.

Tornado Valley proved too strong for his rivals when defeating Red Hot Tooth and Massive Metro in a time of 2:01.2.

The husband-and-wife combination of Andy and Kate Gath became the first dual winners of the Great Southern Star following their success with Glenferrie Typhoon back in 2017.

With three legs run and won, no multiple winner had appeared and the Gr.1 $100,000 Hygain Australian Trotting Grand Prix at TABCORP Park, Melton was a golden opportunity for Tornado Valley to make his claim to be crowned champion trotter.

Sent off as favourite, Tornado Valley had a tough trip early with plenty of pressure telling over the concluding stages as the beautifully bred Dance Craze stormed to victory for Anton Golino and Glen Craven.

Congratulations to Andy and Kate Gath plus owner Norm Jenkin.

It’s the second time a Gath trained trotter has been declared Trotting Master following the efforts of La Coocaracha back in 2002.

And Tornado Valley becomes the first Australian trained trotter to be crowned Trotting Master since Sparkling Success back in 2018. 21 December 2020
Shane Graham's purple patch rolls on
Catch up on the week’s harness racing action in our weekly review, thanks to Darren Clayton. THE GOOD Shane Graham has continued his great form since returning to the sulky mid-year and on Saturday showed the type of form that took him to the Australian Drivers title back in 2014/15. With just... 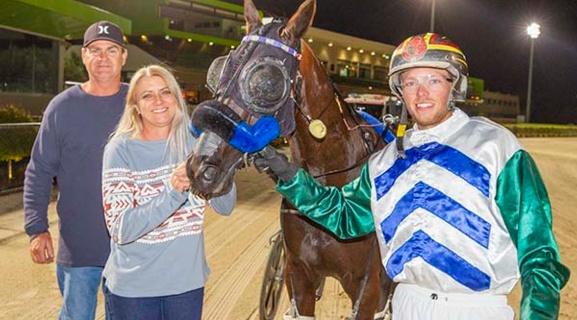 21 December 2020
Trots Review: Bomb's away for Basil and Jack
“And he is absolutely flying” says race caller Dan Mielicki of Bettor Be The Bomb after Basil Dooley’s fabulous flying machine stole the show at Tabcorp Park Melton on Saturday night. The description was also apt for reinsman Jack Laugher, who showed plenty of aggression to steer the... 21 December 2020
Gloucester Park Review 18th December 2020
Tilbrook’s mission accomplished Experienced trainer-reinsman Peter Tilbrook was a man on a mission when he went to the 2016 Gloucester Standardbreds Yearling Sale with a single object --- to buy a filly whose dam Living On Love had managed one placing from seven starts and whose first two foals...