Phillips first Group 1 triumph on Une Belle Allure was followed quickly by his second when he found the front mid-race and Red Hot Tooth put in a searing performance to win the Lyn McPherson Memorial Breed For Speed Gold Series Final.

“Unreal, words can’t describe how this feels right now,” Phillips said. “It’s a little bit surreal, I think I’m going to have to get back into the drivers' rooms and pinch myself. Massive thrill.”

They are the high emotions that were shared by Males, who was full of pride for her Yankee Paco four-year-old mare.

“She’s an absolute little superstar, I just love her,” Males said. “She’s very casual, she’s like a kids pony half the time, she just plods around half asleep, but when she gets on the track she just does the job.”

Nica Macdonon initially held High Gait and Red Hot Tooth at bay, with High Gait directed into the chair while Phillips waited and then had a second crack at the lead when Charming Lavra loomed up on his outside at the bell.

“It definitely surprised me the one (Nica Macdonon) holding up early,” Phillips said. “I knew it got out of the gate good, but when Ants came (on Charming Lavra) I was confident (Nica Macdonon) would be happy to sit on me once it had done that little bit of work early.

“Once (Red Hot Tooth) found the front she was travelling so good, when Jason (Lee on Heavenly Sister) got up outside her she was just on the bit. She just felt like she was never going to get beat.”

After a 58.8s first half she peeled off a 28.7 third quarter and in the final straight she looked a class above, winning by 1.6m to Heavenly Sister with Illawong Helios 10.2m back in third.

“She’s just a great little trier,” Phillips said. “When she’s in front she’s hard to get past.

“Paul and Kari have been massive support for my career and this horse is unreal. She means the world to me. She was my first winner at Menangle, my first Group winner and my second Group 1 winner.

“She’s a different horse as a four-year-old. It was always a worry whether she’d improve from a three-year-old and take the next step, but I definitely think she’s proven this time in that she’s done that.” 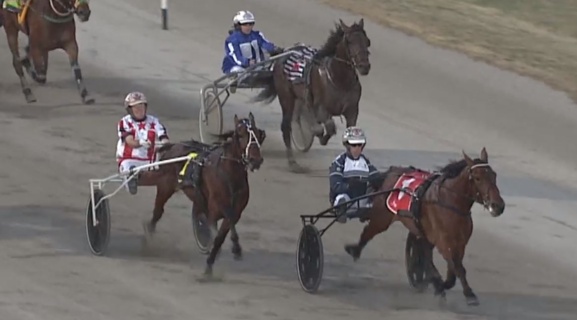 4 December 2020
Trots Review: Winning drivers "very proud" as Langs honoured
Talent fittingly came to the fore as Aldebaran Ursula and Utopia were impressive victors on a special night’s racing at Bendigo, where the industry celebrated the Lang family. Winning drivers Kate Gath and Greg Sugars said they were honoured to steer the first victors of The Graeme Lang and The...

4 December 2020
NSW: Hart to drive in-form filly
PACING filly Giddy Heights has the best recent form out of the 86 horses nominated to race at Newcastle tonight. The three-year-old has won her last three starts and could easily make that a quartet as she faces Race 6. Having only been in the care of Clayton Harmey for four starts, the daughter of Somebeachsomewhere... 4 December 2020
SA Trots - Southern Cross Trot - Wings On Her Feet
SOUTH Australian horsewoman Kim Procter is hoping for a happy homecoming of sorts this weekend. Relocating to Victoria earlier this year, Procter left Wings On Her Feet in the care of her father, Jeff, with one target in mind. At Globe Derby tomorrow night, Procter has the opportunity to realise her...