Two goes into one in miraculous Charlton collision Glenn Douglas and Michael Bellman share a sulky at Charlton.

Mateship was to the fore at Charlton yesterday when Glenn Douglas and Michael Bellman crossed the line in the same sulky after a collision in the finishing straight.

Douglas’ drive Pocket The Deal galloped in the final 200m in the Cup Day Fanatics 3YO Classic, veering in on Michael Bellman’s Knight Sky Safari, who was hugging the pegs.

Bellman takes up the commentary.

“At the time, when I looked up, I saw it sort of gallop and it was holding its ground in a straight line and I thought I’m going to be all right,” he told RSN 927 this morning.

“Josh Duggan (driving Islandspecialmajor) got through underneath it, only just, and once he cleared Josh he just took two bounds to the left and I was coming through at a fairly quick rate of knots and just couldn’t miss him in the end.

“As he whipped across, I hit him with that much force I Shanghaied (Glen) into my cart.”

While Douglas leapfrogged into the sulky from the right, Bellman was almost spat out to the left, with only quick reactions and a bit of teamwork preventing either from hitting the canvas.

“I didn’t really even know at the time, because I had fallen to the left and was heading out of the cart,” Bellman said.

“I was lucky I got hung up underneath the undercarriage of the sulky and hung on with my legs.

“I pushed myself back up off the ground to get back in and as I looked back, here’s Glenn hanging on the other shaft.

“He looked like he was planking for a second, he was laying right back. I’ve just got myself back in, reached down and grabbed him by the hand and pulled him back up in.”

It was a great piece of drivers camaraderie, although that friendship only extends so far.

“I’m just dirty if he hits me up for half my driving fee,” Bellman said.

Most importantly, no drivers nor horses were harmed in the incident.

Click here to see vision of the thrilling finish.

1 December 2021
The Bathurst battle
It is the battle of the Bathurst horses in the first of the Inter Dominion qualifying heats at that track tonight. Father and daughter trainers Steve and Amanda Turnbull will go head-to-head with fellow local trainer Chris Frisby in the $30,000 heat. Steve Turnbull has Atomic Red engaged while Amanda... 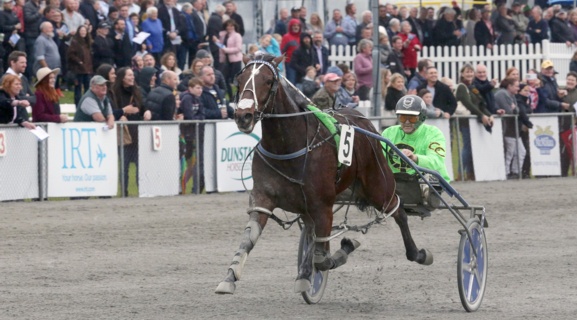 1 December 2021
NZ Update: All Stars' Akuta trials "well" ahead of sires showdown
The mega clash of the NZ three-year-olds next season is still very much on and came more sharply into focus when Akuta returned to the trials on Tuesday. The Harness Jewels hero was given an easy time by co-trainer Mark Purdon against older horses in the Ashburton trial but pleased the boss with how...

1 December 2021
Prizemoney boost for mid-week racing
IT’S the bread-and-butter races that so many of our trainers and owners rely on. So, Club Menangle has moved to secure the future of racing at the premier track even further after their board today announced an increase to midweek prizemoney levels. From the first race meeting in January 2022 the...

1 December 2021
Larkins to pursue next chapter with family in Qld
Senior steward Shane Larkins has advised Harness Racing Victoria (HRV) of his resignation after an extensive career with the integrity team. In early 2022 he and his family will move to Queensland for the next chapter in their lives, Larkins citing “a passion for horses outside the industry and... 1 December 2021
Frisby to stand proud
POPULAR Bathurst trainer and feed merchant, Chris Frisby will stand proud tonight at his home track when two of his horses contest the TAB Inter Dominion heats. His stable star Our Uncle Sam previously has been placed in an Inter Dominion Grand Final in 2018 and will contest heat four of the series....