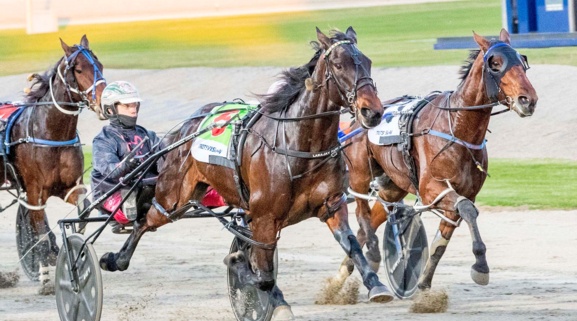 The rise and rise of Larajay Farms was not only reinforced at Tabcorp Park Melton tonight but has also produced an outstanding return for a trots-supported charity.

Replete in the Pacing For Pink silks, Greg Sugars amassed victories number 23, 24 and 25 for the month, benefitting the campaign that raises money and awareness to help the McGrath Foundation support those with breast cancer.

The reinsman was a dominant front runner in winning with La Captain, Momentslikethese and Triple Eight at Tabcorp Park Melton tonight, with each victory drawing a Pacing For Pink donation from Geelong Harness Racing Club members.

And Sugars announced on TrotsVision that he and wife Jess Tubbs wanted to go a step further, with the stable donating $1000 to the fundraiser after tonight’s success.