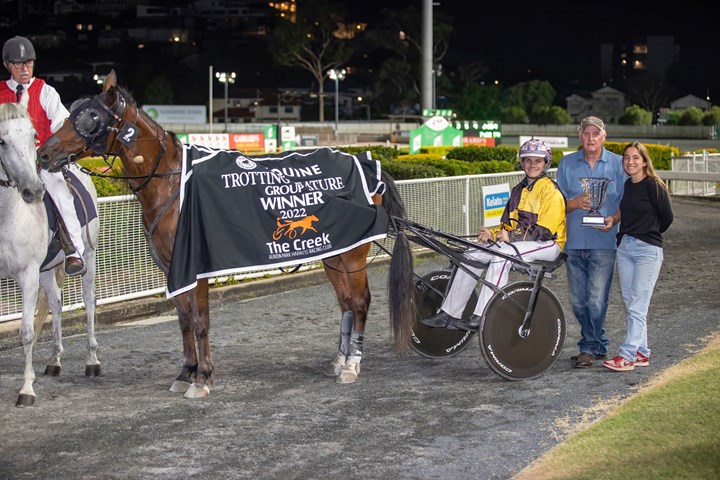 Catch up on the week's harness racing action in our weekly review, thanks to Darren Clayton.

Young driver Lachie Manzelmann had a night to remember at Albion Park on Saturday night, steering home a quartet of winners, including a pair of features on the big card.

Manzelmann made the most of the inside running to send Kingdom Come - for trainer Richard Hutchinson - along the passing lane to claim victory in the 1Equine Trotters Feature, while it was an all the way win in the Queen of the Creek aboard the Ron Sallis-trained Delightful Reason.

The other winners came aboard the Jack Butler-trained Bettor Jiggle, while it was a double for the Sallis and Manzelmann combination with Bitcoin, a pacer owned by Lachie’s mum Stacey.

Bitcoin was the duo's other winner, when leading throughout to claim the opening event on the card.

Bitcoin was back in winning form, sent straight to the front in race one and after Lachie was able to pinch a 31 panel through the second stanza, always looked the one to beat, going on to claim his eighth victory under the guidance of Sallis, seven of those when driven by Manzelmann.

Kingdom Come was the second winner for the night, darting through to claim victory, with all five Queensland victories for the veteran square gaiter coming when driven by Manzelmann.

Finding the pegs early, Manzelmann allowed Soextra to take control soon after, biding his time as the leader set a genuine tempo.

Running the quarters in 28.8, 29.9 and 28.4, as they swung for home it was a two-horse race with Bettor Jiggle angling to the outside and easing past the leader to take a three-metre victory, while the third placed Docta Feelgood was a further 21 metres away.

Completing the quartet in the Queen of the Creek, Manzelmann was again dictating in front with the Sallis owned and trained mare, rating Delightful Reason perfectly with a steady 3.5 lead time followed by a 28.1 opening quarter and then pinching a 31.2 second split.

Holding all the aces thereafter, Delightful Reason was eased down to the wire in claiming a five-metre margin over Oaxacan Dream.

On a night where the industry came together for the Brett Cargill fund-raiser, all horses wearing the number four saddle cloth were represented by that driver wearing Cargill’s racing silks, Delightful Reason the only winner of the night

With 65 winners for the season, the past month has been a successful run for Manzelmann, Saturday’s quartet following on from a double the previous Saturday night.

The successful night did come at a cost for Manzelmann, copping a fourteen-day suspension out of the 1Equine Trotting feature for breaching the whip use guidelines. 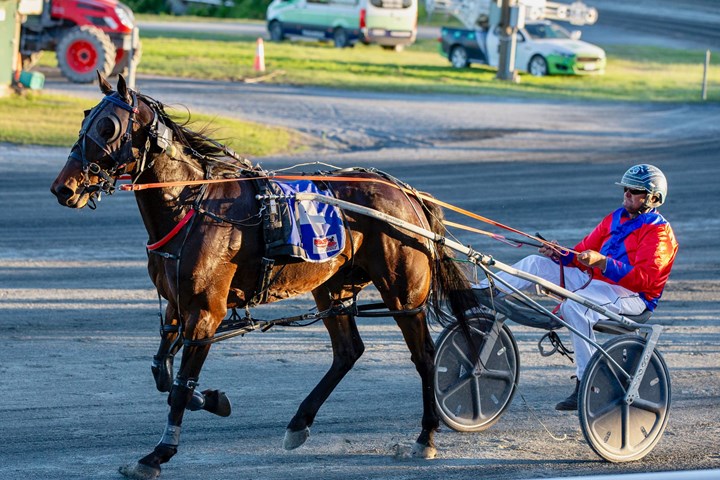 A half-neck was all it took to deny a special achievement in the past week.

My Ultimate Clippa, trained and driven by Ricky Gordon, was lining up at Redcliffe on Friday and after leading for most of the race, was collared on the wire by Mount Hercules for the Chloe and Jack Butler combination.

Had My Ultimate Clippa been able to hang on for the win, the four-year-old would have completed a rarely achieved feat of claiming three victories in the same week.

Starting out a successful week, the Gordon-trained pacer was triumphant at Redcliffe on Sunday night, winning in fast time around The Triangle after leading throughout from gate four and stopping the clock in a 1.56.5 rate.

Engaged on Friday and securing the coveted inside alley, Gordon was once again at the reins when attempting to lead throughout, only for Mount Hercules which had the cold sit in transit, darting up the passing lane to score.

Backing up at Marburg for his third run of the week on Sunday, Gordon once again used the gate speed of My Ultimate Clippa to advantage, spearing out to lead.

Controlling the race from the front, the gelding was able to claim an effortless victory and put behind the disappointment of the narrow defeat on Friday.

In a consistent patch of form, My Ultimate Clippa has missed the money just twice in his past ten starts, securing five wins in that same period.

Ricky Gordon has also been in good form in recent weeks, claiming a winning double at Marburg on Sunday after a winning treble the previous Sunday at Redcliffe.

The purple patch of My Ultimate Clippa has taken the gelding’s record to six race wins this season, the best of Gordon’s team for the term, one win ahead of Bella Godvia and two in front of Always At Night.

Claiming his first win of the season and 14th of his career, Kingdom Come presented trainer Richard Hutchinson with his first Group status victory on Saturday night.

The 12-year-old veteran never worked around another horse, with driver Lachie Manzelmann able to elicit the best from Kingdom Come, charging home along the inside to arrive in the last strides to take out the 1Equine Trotting feature at Group 3 level.

In taking out the Group 3 event, it provided trainer and former stud master Richard Hutchinson with his first win as a trainer in Group company.

Kingdom Come has been with Hutchinson since late 2020, having previously spent time in the stables of Andy Gath, Darren Hancock, Paul Beresford and Craig Cross, arriving in Queensland with nine victories against his name.

At his best when driven cold and coming with one closing challenge, Manzelmann executed the brief to perfection, easing from gate two to position four back on the peg line as Van Sank set the tempo.

With Humble Ladd applying pressure to the leader from the chair, Red Castleton had settled in the trail with Sugarinspice three back on the inside.

Turning off the back straight on the final occasion, Humble Ladd was feeling the pressure of the tough run and started to yield.

That left Red Castleton to ease to the outside and as Sugarinspice also angled into open space, she overreached and broke stride.

That allowed Kingdom Come to make ground along the inside and the veteran responded when the gap opened, darting through to claim victory by a head margin.

“Kingdom Come coming through, its going to be a boil over,” caller Chris Barsby said, and that it was, with the Hutchinson trained square gaiter starting at $126 fixed with TAB.

The win was the fifth under Hutchinson’s care with the winning prize money taking the son of Monarchy beyond $200,000 in career earnings. 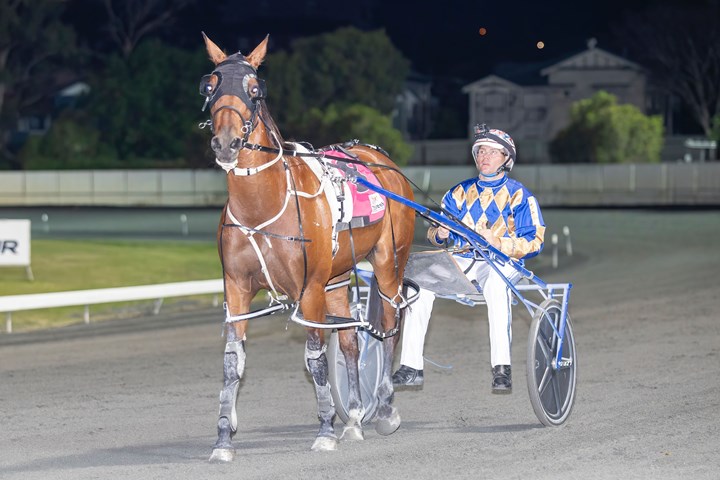 Trainer Shawn Grimsey claimed another feature race success when his mare Speed Dating was able to claim the second edition of the Peak of the Creek Final, held at Albion Park on Saturday night.

Starting from barrier five in the heat on Thursday, the mare was taken back early and angled to the inside as Future Assured set the pace out in front.

With Nathan Dawson in the sulky, he did not go around a horse in the run and charged home along the inside to claim a fast-finishing second placing, running the winner to the barest possible margin of a short-half-head.

Securing barrier eight for the Final, Dawson had the choice of Takingcareofbusiness that he partnered to claim the first heat of the series and Grimsey’s mare, opting for Speed Dating.

As the field settled into order in the Final, it was Future Assured taking control from barrier two, with Takingcareofbusiness in the trail and Brigadiers Son forced to sit parked, with Speed Dating hemmed away three back against the markers.

Trent Dawson tried to break it open down the back straight on the final occasion, with a 27.1 second quarter, skipping clear between turns as the chasers looked to be off the bit.

Meanwhile, Nathan Dawson had Speed Dating travelling but just needed open space, with the gaps yet to present.

With Takingcareofbusiness dropping into the passing lane attempting to issue a challenge, the space opened between runners and Nathan sent his drive into the gap, the mare responding and darting through to claim victory.

It was the third feature victory of the year for Shawn Grimsey, adding to his wins in the Listed Marburg Goldstrike with So Am I and the three-year-old Final of the Redcliffe Sales Series with the stable star, Teddy Disco.

A recent purchase by the Grimsey family, the winner’s cheque of $31,20 takes the All Speed Hanover mare to one win shy of $100,000 in stake earnings, securing a new personal best time with the 1.52.4 winning rate.

It has been a successful turnaround, claiming a Group 2 victory just five starts after purchasing the mare out of Victoria.

The Queensland Summer of Racing Carnival continues this week with another big night of racing from Albion Park on Saturday night.

Highlighting the card will be the Group 2 Queensland Cup, with an added incentive to victory, the winner receiving a golden ticket ballot exemption into the upcoming Inter Dominion Series in Victoria.

The same offer will be available for the square gaiters, with the winner of the Group 2 Queensland Trotters Sprint securing a golden ticket exemption for the Trotters Inter Dominion.

Saturday nights card is a beauty, with the Listed Bill Dixon Memorial sure to be hotly contested, as will the Group 2 Forever Gold Mares.

For the three-year-olds there will be $30,000 Group 3 features for each sex along with a combined two-year-old open event.