Jack adds another top mare to his team The depth of the pool of open class of mares in New South Wales has never been stronger.

The inclusion of Group 1 winning mare Jeradas Delight who recently joined the Jack Trainor stable and the return of Bathurst mare Ballerini from a campaign in Queensland has only bolstered the ranks.

Jeradas Delight was trained at Grenfell by Mark Hewitt early in her career but has spent the past two seasons in Queensland under the care of former Bathurst mentor Mark Butler, where she enjoyed good success that included victory in last year’s Group 1 Garrards Golden Girl at Albion Park.

The daughter of Bettors Delight will have her first start for Trainor on Saturday night at Tabcorp Park Menangle where she will contest the Ranji Bill Ladyship Stakes.

The Group 3 event is littered with inform mares which will give Trainor the chance to gauge just where Jeradas Delight is at as he plans her racing schedule moving forward.

“She is a lovely mare, and I am so please she has joined my stable,” said Trainor.

“She has only been with me for a brief time, but already she has impressed me with her work, and I have no doubt she will perform well on Saturday night.”

“Mark Butler sent her to me in excellent condition. She is race fit and ready to go.”

“Saturday’s race is quite strong as there are a lot of well performed mares in it. But her form up north was equally as strong.”

“I am grateful that her owner Ray Cahill sent her to me. He was keen to get her back down here and I am pleased to be training her for him.”

Trainor has proven in the past that he can prepare a top class mare at the highest level as he trained and drove Stylish Memphis to win the past two Ladyship Miles.

“I have been very fortunate to have had some lovely mares come through my stable and I am confident that this one can also perform well for me.”

“Both horses will be driven by Jack Brown and have sound claims. But from the draw I would rate Luke John as my best winning chance.” 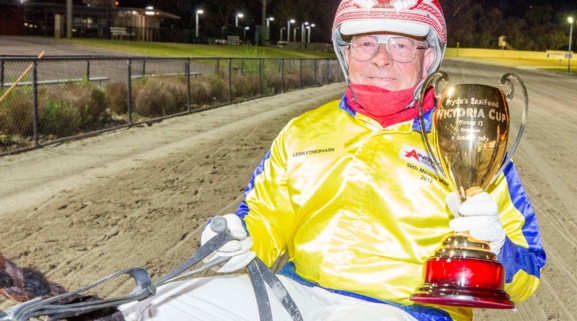