Redcliffe may not be known for surf beaches like the Gold or Sunshine Coasts, however that has not stopped Victorian driver Michelle Phillips riding the crest of a wave during her Queensland visit.

The diminutive Victorian has had four race drives since arriving in the Sunshine State, steering home three winners and claiming her first Group 1 victory.

On Saturday at Redcliffe the night started with an easy victory aboard Alby Two Chains, the four-year-old franking his eye-catching performance in last week’s Patrons Purse with a dominant all the way victory.

Sent straight to the front from gate 4 by Phillips, last season’s Tasmanian Derby winner was untouched in the 12-metre victory, pressing his claims for a spot in the Rising Sun on July 9. 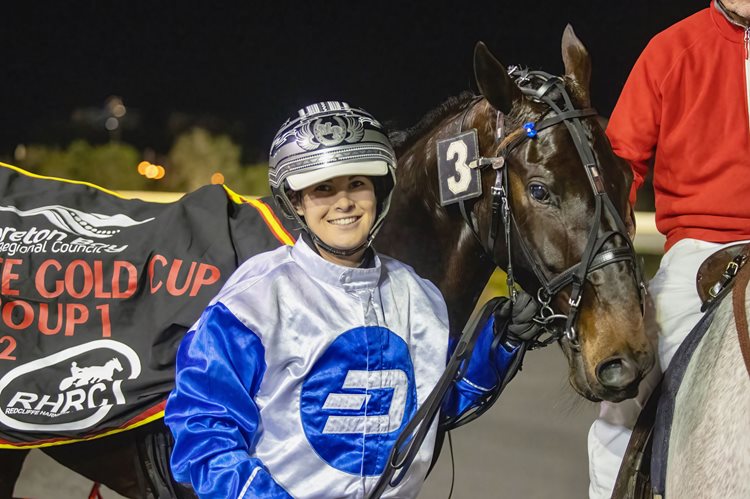 The second of Nicholson’s Rising Sun prospects is the four-year-old Sebs Choice, the gelding claiming the Redcliffe Gold Cup also courtesy of a Phillips front-running drive.

Safely away from the tapes from position three, Phillips had the son of Bettors Delight in front as soon as the strands released and from there was never headed.

Phillips was able to pinch the race through the first half of the last mile, able to amble through the opening two splits in 31.7 and 31.3 for a pedestrian 63-second first half.

From that point, anything back in the pack was going to find it tough with the closing quarters of 27.1 and 28.7 putting it out of reach.

Northview Hustler stuck to the pegs and charged along the passing lane to grab second place for trainer Jack Butler and driver Hayden Barnes, with Captain Crusader who had the sit on Sebs Choice throughout, holding on for third.

Phillips as developed a strong bond with Sebs Choice, having driven the gelding in 10 of his 13 victories.

“He was there in a hard time of my life and he’s just picked me up every time. I just can’t thank Bully (John Nicholson) and the family enough for giving me the opportunities,” Phillips told Sky Channel’s Ryan Phelan after the race.

“He kept coming up the straight and didn’t give in. His heart is so big right now.”

In claiming the Redcliffe Gold Cup, Phillips secured her first Group 1 win as a driver, with Sebs Choice now providing her with four wins at Group level.

Along with Saturday’s Group 1 success, the pair have combined to win the Group 2 APG Four-Year-Old consolation along with the Breeders Crown Silver for three-year-olds and the Warragul Cup, both held at Group 3 level.

With the Rising Sun on the horizon, that bond could strengthen.

Going into Saturday night’s Redcliffe Derby, the chatter surrounding the trial performance of Ripp earlier in the week, had overshadowed the depth of field he would need to defeat.

Given no favours from outside the front line in barrier 6, there were also some question marks in how the dual Group 1 winner would handle the unique track configuration.

Opening at an odds-on-quote to secure victory, the son of Somebeachsomewhere held firm in the market throughout the week to jump as the race favourite.

However, soon after the start, the intentions were clear that the NSW visitor would be needing to earn the victory- should he be up to the challenge.

As the gate pulled way, it was the Redcliffe track specialist teddy Disco that fired off the gate and was in front soon after the field settled into their positions.

Ripp was left wide, with Doug Hewitt opting to press on to sit parked outside Teddy Disco.

It was soon obvious that Ripp was not comfortable on the bends of the track and was scrambling his way around each turn.

With Nathan Dawson trying to put a gap on the field, Ripp could do more and before the 400m looked a spent force.

With the strong tempo, Teddy Disco also started to feel the pinch and the swoopers started to make their impact from back in the field. 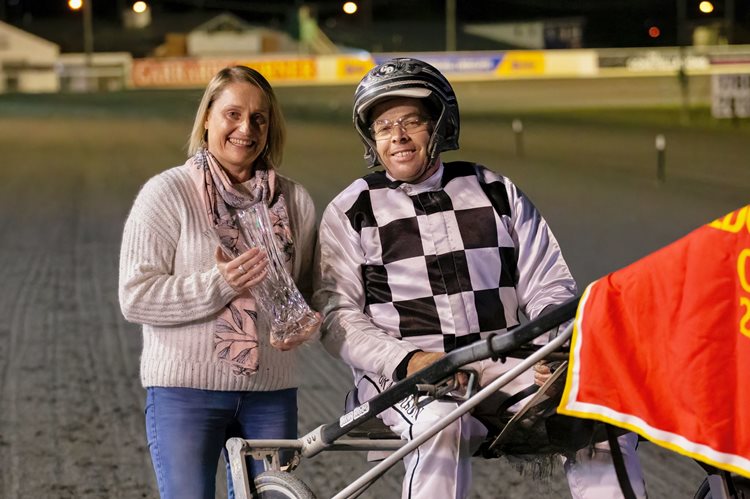 The Grant Dixon trained Tims A Trooper, who was also having his first start at Redcliffe loomed strongly and sweeping down the outside had the speed to arrive.

Dangerzone for Brendan Barnes and Jack Butler was stalking Tims A Trooper, but could not reel in the Dixon trained colt, with Teddy Disco fighting hard to hold on for third.

With the race increased in distance back up to 2280m, the winning mile-rate of 1.56.9 set a new age record for the distance, breaking the previous record of 1.58.3 set by Bling it On, the last time the race was held at the distance back in 2014.

With Ripp already guaranteed a start in the Rising Sun on July 9, Bernie Hewitt’s star gelding will face another tough ask.

After three starts for the Narissa McMullen stable, Global Flight now looms as a major player in the Darrel Alexander Memorial Series.

The six-year-old gelding remains undefeated since crossing the Tasman, claiming his third victory in the first-round heats of the G1 Trotting feature.

McMullen purchased the square gaiter out of the South Island of New Zealand, the gelding arriving in Queensland with 4 wins in 61 starts.

Making his debut in the red and white for McMullen back on June 7, the gelding was able to overcome a 20-metre handicap, sweeping home in the closing stages to score.

Second up Global Flight was mighty impressive off a 40-metre handicap when pressing on to find the front and then claiming victory by a 9-metere margin. 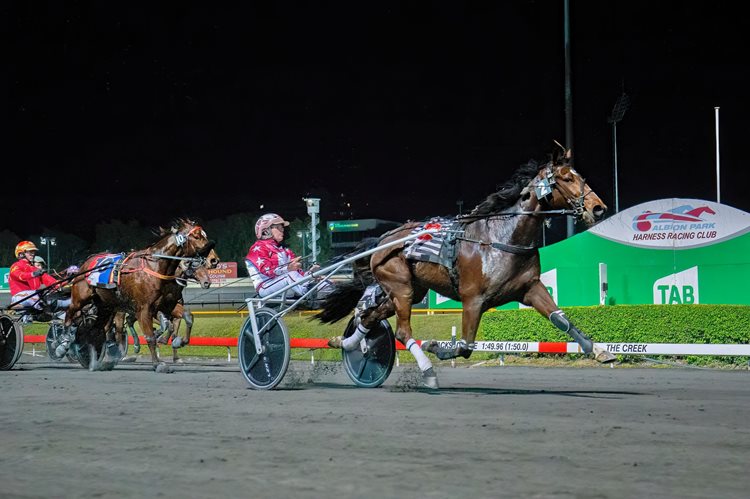 Handicapped off the front tape for the DJA Series, Global Flight was sent out as the race favourite in the Round 1 first heat and was safely into stride when the tapes released.

With Natty Pagger showing speed to work across and find the front, Northern Muscle took over from Natty Pagger and then in turn released the front to Riley Moment

That left McMullen and Global Flight buried away soon after and four back along the inside with two laps to travel and would be relying on plenty of luck to maximise their first round points.

With Riley Moment starting to feel the pressure at the 500m, Lotamuscle worked to the front and the luck arrived for Global Flight as the gaps opened and allowed McMullen the space to work away from the inside.

Looming three and four wide as the field swung for home, Global Flight responded, letting down smartly to sweep by and claim a 7-metre victory.

With the second round of heats to be held this Saturday night over the shorter 2138-metre trip, Global Flight has drawn the inside lane, looking to maintain his unbeaten streak.

Amore Vita has been brilliant in her two starts thus far in the Constellations Carnival, the latest when never in danger in claiming the Redcliffe Oaks.

Driver Cam Hart surged the filly out of the gate and once in control soon after the start, the high-class filly looked to have the race at her mercy.

Rolling along in front, Amore Vita looked to be cruising and with Soho Rhapsody tracking her every move, looked the only danger.

However, there was no danger, when Hart let his filly go, she exploded clear and left the chasing fillies in her wake. 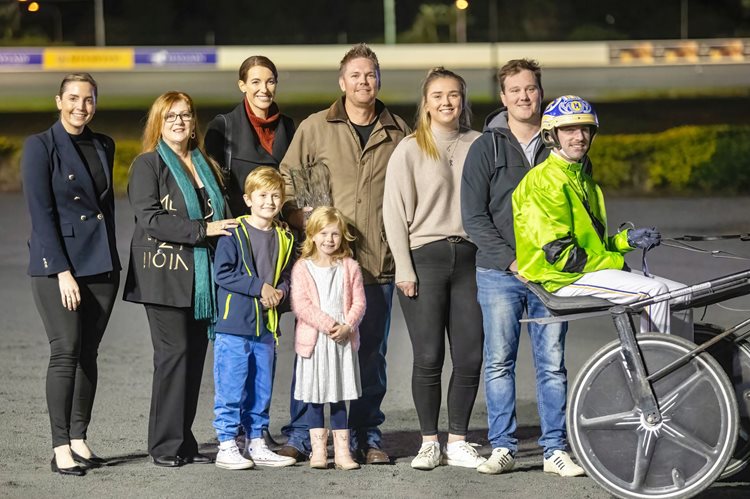 With the huge victory, the Nathan Purdon trained filly broke a twenty-two-year-old class record with her 15-metre demolition.

It was April 2000, that Vanyana set a 3YO fillies class record of 1.59.7 for the 2280-metre journey, with Amore Vita obliterating that record when stopping the clock in a rate of

Connections will now have a week to consider what the Constellations Carnival entails for Amore Vita.

Do they toy with the idea of a Rising Sun start, or do they keep the star filly to her won sex, where the South East Oaks and Queensland Oaks appear at her mercy.

An interesting week ahead.

The racing week in Queensland starts with a big eleven-race card on Tuesday at Albion Park, with three meetings for the week from The Creek.

The highlight will be the inaugural running of the Group 2 Queensland Sun, where the fifth and final ballot free position in the Rising Sun is up for grabs.

Saturday night’s Redcliffe Derby winner, Tims A Trooper has landed barrier one and lands the ideal opportunity to join his stablemate Leap To Fame in the Rising Sun field.

Other features on Saturday’s card will be the second-round heats of the DJA, the Wondais Mate Open and the Paleface Adios Classic for the 2YO’s.

Dual Group 1 winner Jewel Melody will make her first Queensland race appearance in the Paleface Adios as she continues on towards the QBRED Triad. 6 August 2022
Callaghan and Alta reunite
After finishing fourth in Grand Circuit company last start Alta Orlando is back on home soil racing at Menangle on Saturday night. The Belinda McCarthy-trained pacer was just out of the place prizemoney in the Blacks A Fake Queensland Championship at Albion Park three weeks ago, with the feature going... 6 August 2022
Welcome return for Drop The Hammer
WIN, lose or draw, it's good to have him back. That's the call from Inter Dominion winning horseman Darren Hancock ahead of Drop The Hammer's racing return at Club Menangle on Saturday night. A triple Group Two winner, Drop The Hammer has been side lined since his inglorious performance at... 5 August 2022
Star mare Jeradas Delight to race into the sunset
More than 12 months on from Jeradas Delight’s stunning The Golden Girl triumph of 2021, owner and breeder Ray Cahill still almost cannot believe it. The NSW-based Cahill can recall his mare battling to win races at Parkes in the middle of 2020. And, amazingly, around a year later, she was a Group...