Love Your Work was the heavily supported favourite off the back of his demolition in the entires and geldings heat, however a second line gate and a tough run when kept three-wide proved too big an obstacle.

Although he has won some of the most famous races in North America, it was the biggest win for Darren McCall since relocating back to Queensland at the end of 2021.

Racing at some of the biggest tracks in the States and Canada for over a decade, McCall has won a pair of Breeders Crowns, the Roses Are Red, the Metro Pace and countless other features that equate to Group 1 status in Australia.

Purchased from the 2019 APG Sale in Sydney, Girl From Oz has competed against some of the best pacers right through her career thus far, having raced at Group 1 level in races such as the Bathurst Gold Tiara, Gold Bracelet and the 2YO NSW Breeders Challenge Final.

While McCall has won some of the biggest races in North America, as a trainer in Australia, he can boast two wins at Group 2 level, and it is Girl From Oz that has provided both of those victories.

A winner back in 2020 of the two-year-old Pink Bonnet at Menangle, the now four-year-old claimed her second Group 2 victory with Saturday’s APG success.

“She could easily have more money on her card, but she seems to have drawn badly in every feature final we have made it to,” McCall laments.

Bad gates and bumping into a smart crop of fillies that includes the likes of Anntonia, Soho Almasi and Joanna amongst others has certainly played a role.

Girl From Oz is raced by a large group, with the Canadian based TheStable.ca also involved.

TheStable.ca is a fractional ownership group with its members having small shares in dozens of horses.

They became involved in Girl From Oz through McCall’s association with Anthony MacDonald when based in North America.

“I think last time I checked they had owners from 12 different countries and over 700 individual owners involved,” McCall explained.

“I’ve known Tony for a long time and I had been in contact with him just before he came out to Sydney in 2019.

“He was out here for a NSW Owners seminar and the APG Sales were on that weekend.

“We had a talk and he said that he was looking at buying two yearlings.”

As it turned out, one of those purchased was Girl From Oz, although she was originally passed in before a sale was struck for $18,000 and McCall was given first choice which filly he would train.

By Heston Blue Chip out of the mare Girls Go Racing, the breeders Gwenda Murphy and John Pritchard were convinced by MacDonald to keep a share in the filly and they still hold a 25% interest.

Murphy was in the ownership of Girls Go Racing, winning a share in that horse in a lucky patron’s promotion, with an all-female ownership group set up to race a filly back in the 2013/14 season.

When Girls Go Racing had finished racing, Murphy along with John Pritchard purchased the mare as a breeding proposition.

With the first foal being Girl From Oz, it has been an amazing ride for many people involved in the four-year-old.

“There is another lady who has 5% of Thestable.ca fractional and she came down from America to New Zealand for a holiday and Girl From Oz was racing at Menangle so she flew over just to watch her.” 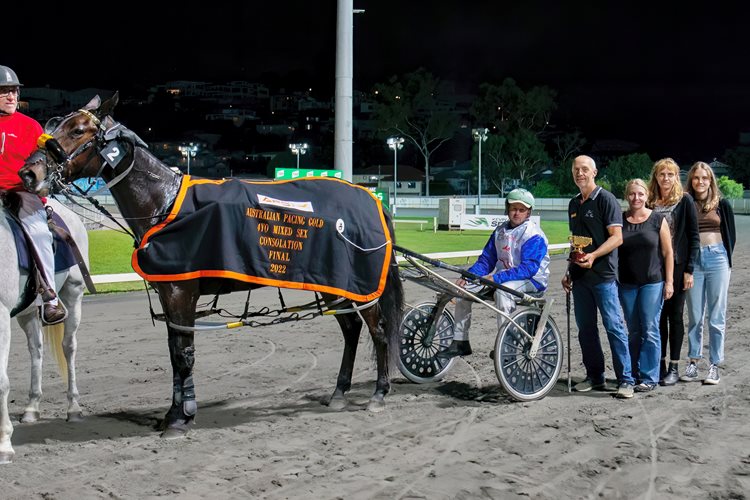 Alexandra Ware is another part owner of ‘Gwennie” as Girl From Oz is affectionately known and has an amazing affinity with the mare.

Now a three-time group winner, the mare will be given some light weeks before racing again.

“She was a little tired after the win, so she can have an easy time before we race her back into a campaign,” the trainer said.

The nominations were strong for the Marburg Show on Saturday, leading to a full program of heats, catering for all classes of horse.

With the Garrards Showcase Series again being held with the Final at Redcliffe, the added enhancement of a Final for the lesser credentialed performers has dangled a carrot for many.

Both Finals will be held on at Redcliffe on Friday, June 17, on a bumper night that also includes the Patrons Purse, 3YO Sales Final and the 2YO Sales heats.

The Marburg Show was the fourth in the Series following Warwick, Toowoomba and Nanango with the remaining Shows and Gympie and Kingaroy to complete the heats.

The weather was not kind for Marburg, yet despite the inclement conditions, all eight heats were able to be contested.

It was, however, not kind enough for both finals to be completed.

After the long day with rain, racing and other ‘ring events’ of the Show, the racing surface had deteriorated and with darkness descending on the Showgrounds from the heavy cloud cover, both Finals were abandoned.

With some prize money made available for the finalists, the decision was made to split it evenly amongst all horses that had progressed through to the Finals.

It was a bittersweet moment for trainer and driver Steven Doherty following the win of Jansson at Albion Park on Friday night.

Doherty only took over the training of the square gaiter back in March following the passing of his previous trainer and good friend, Mal Charlton.

Developing a relationship over many years with Charlton, Doherty has taken over the training of some of the team previously trained by the well-respected Charlton.

Jansson was a super consistent horse for Charlton, having raced 85 times under his care, scoring 12 wins and finishing top-three on a further 28 occasions, averaging close to $1,000 in earnings every appearance, banking $85, 926.

Since taking over the preparation of the nine-year-old gelding, the pair have missed a top-three finish just once in eight appearances. 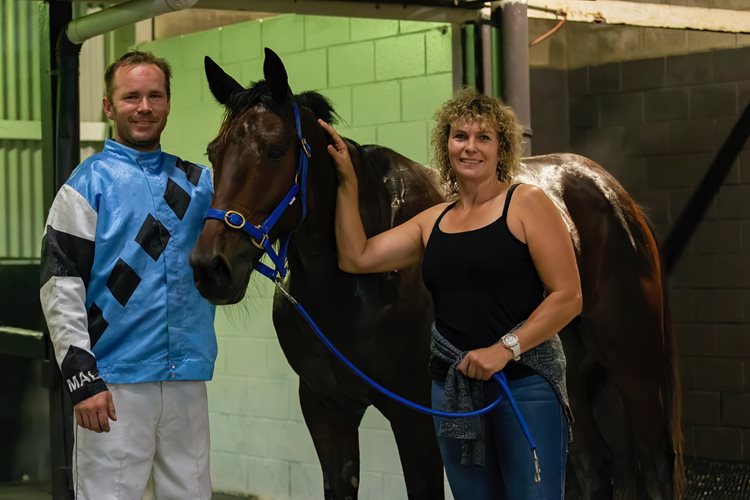 A brilliant beginner from the tapes, Jansson found the front from the 10-metre handicap soon after the start, before taking the trail as Sobomba moved around to take control.

Angled into the passing lane as the field straightened for the run to the judge, Jansson sprinted through to score victory by just under three metres.

With a small wave of the whip towards the sky as they crossed the line, it was the first win that Doherty has recorded since taking over the training of Jansson.

With his explosive speed off the mark when the tapes fly, the gelded son of Monarchy is arguably one of the quickest beginners from the traditional starting method in Queensland.

That press button speed saw him finish a narrow third in the recent Jim McNeil Final after finding the front soon after the start prior to taking the trail on the eventual winner, Regal Appointment.

With that first win now behind them, a small amount of pressure is lifted and more wins are in store while ever he can be easily put into winning positions in transit.

While a training quinella may be a regular result for some bigger stables by sheer weight of numbers, there were two smaller trainers that each recorded their own unique result at Redcliffe on Thursday.

In successive races, a pair of trainers were able to finish one-two from their small racing teams respectively.

The first went to Mark McNee, who has just four horses in work, when Lifes Black was able to claim victory over his stablemate La Safron, sweeping home to claim a winning margin of two metres.

Having reached a milestone moment the start prior by becoming the first horse for McNee to eclipse $100,000 in career earnings, the one-two finish turned the tables from December last year where on that occasion La Safron defeated Lifes Black.

It was a special moment for the winning trainer with the driver of Lifes Black, Zac Chappenden, wearing colours that are owned by McNee’s father.

The colours of red with white diamonds were handed down to McNee senior from the legendary horseman Perc Hall in the 1960s.

Just one race later, and it was another one-two finish, this time for trainer Tayla Gillespie when Johnrod defeated Purple Shades.

With just a small team in work and rarely having more than three or four horses competing at the same meeting, on Thursday Ohoka Jimmy accompanied his stablemates to Redcliffe to represent the Gillespie stable.

A model of consistency this season, Johnrod took his 2022 record to four wins and seven minors from 13 starts, with Matt Elkins claiming three of those wins with the other when driven by Nathan Dawson.

Purple Shades was driven into second placing by Shane Graham, and along with Johnrod, both have been able to record seven wins each under Gillespie’s care.

With nine wins to her name this season, Gillespie is closing in on 100 career wins, a number that she will reach by season end if her current strike rate is maintained.

The racing programme this week is a little different with Redcliffe hosting a Thursday night meeting.

This will complement the normal Wednesday night fixture where another two Trot Rods heats will take place, along with an invaluable lead-up to the Redcliffe Cup.

Friday night racing will also be from The Triangle as will another Sunday night fixture, seeing four meetings out of six this week held at Redcliffe.

Albion Park will host a 10-race card of metropolitan racing on Saturday night.