The form lines coming out of the inaugural 2021 TAB Queensland Constellations carnival are coming to the fore with a number of exciting pacers ramping up their southern campaigns.

Recent Sunshine State stand outs Amazing Dream, American Dealer, Bondi Lockdown and Bar Room Banta have all taken the elite standard of racing throughout the carnival with them into trials and races.

The Aaron Dunn trained and driven Bondi Lockdown was not one of the headline acts during the 2021 carnival but his performances since have shown the strength of the TAB Queensland Constellations.

The three-year-old colt has put three in a line since returning to Victoria, with his northern campaign highlighted by a fifth-place finish in the Group 1 Queensland Derby in what was an encouraging effort against some of the best juveniles from Australia and New Zealand.

One of the three wins in Victoria was at Group 3 level at Bendigo late last month.

The Horsham-based Dunn believes his emerging colt has improved out of sight following his Queensland trip.

“He has come home and it seems to have strengthen and matured him a bit,” Dunn said.

“It is the first time I have really travelled as a trainer so I made sure we stopped a few times on the way down to help them.

“I gave him a week off after the Queensland Derby.

“Because he is a colt, he probably travelled better.”

The voice of Queensland harness racing Chris Barsby thinks Queensland Constellations participants will be in line for more feature success later this year.

"If any further proof was required about the strength of the 2021 TAB Constellations, the form of many of the interstate raiders is impeccable currently," Barsby said.

"Bondi Lockdown is unbeaten in three starts since the Queensland Derby and Bar Room Banta impressed with a thumping Leeton victory last week in track record time underlined his class, while American Dealer is set to resume shortly, they'll all make their presence felt during the Victoria Derby series.

"With the Victoria Cup fast approaching, I'm certain the open class form from the carnival will again measure up through the likes of King Of Swing and Amazing Dream."

Bondi Lockdown, who has eight victories to his name from 20 starts and seven minor placings, is now headed towards the upcoming $200,000 Victoria Derby Final over 2760 metres at Tabcorp Park Melton early next month.

“He went good up there in Queensland, he just probably did not get the right runs and I might not have driven him well enough the first week,” Dunn said.

“I found him an easy enough one first-up back here in Victoria following the carnival and then he put in a real tough one second-up, which has showed a bit and gives me the confidence to drive him solider this week and enough for them to show him a bit more respect from now on.

“I will head straight to the heats of the Derby early next week month, so we have around three weeks into that.

“We will probably not race him again after that.”

Heats for the Derby will be run on the first Saturday of next month, also at Melton.

Amazing Dream, who claimed dual success in the Sunshine State this year – winning the first ever The Rising Sun and the time-honoured Blacks A Fake – resumed in a trial earlier this week, which the quality mare won comfortably.

Following the Melton trial in which Amazing Dream looked to be cruising in, the Nathan Purdon-trained mare will now look towards the upcoming Group 2 Kilmore Cup in just over a weeks’ time.

Amazing Dream’s path is then likely to be towards the $300,000 Group 1 Victoria Cup in the weeks after.

Reigning Group 1 Queensland Derby champion American Dealer also returned to the track in a trial earlier this week in impressive fashion and is also likely to head towards Kilmore next Friday evening. 22 September 2021
First driving win for Liam Older
It was a big night for 17-year-old reinsman Liam Older in Hobart on Sunday night when he drove his first winner at his 15th race drive. The win came aboard the Michael Laugher-trained Believe In Forever in the Tasmanian Equine Veterinary Services Pace. From barrier one, Older settled the gelded son of... 22 September 2021
Unbeaten filly faces next task
Unbeaten youngster Winona Writer will be looking to make it four in a row at Bathurst tonight. The Bernie Hewitt-trained filly resumed from a spell at Bathurst last week to win effortlessly by more than nine metres. Winona Writer clocked the mile rate in 1:57, her slowest time to date. The daughter of...

22 September 2021
Turnbull's feature double
IT’S fair to say the Turnbull family has been the dominant force at Parkes Paceway for the past three decades. A.D., Greg, Wendy, Steve, and Amanda have all won multiple trainers and drivers’ premierships at the track and this year Nathan could join the ranks. When A.D. and Greg were on top,... 21 September 2021
The athletic horse: respiratory system
In the past two articles, we have looked at the extraordinary size and function of the horse’s cardiovascular system. It is one of the most efficient oxygen delivery systems in the animal world and is the prime reason why horses are such gifted athletes. But a delivery system is only as good as... 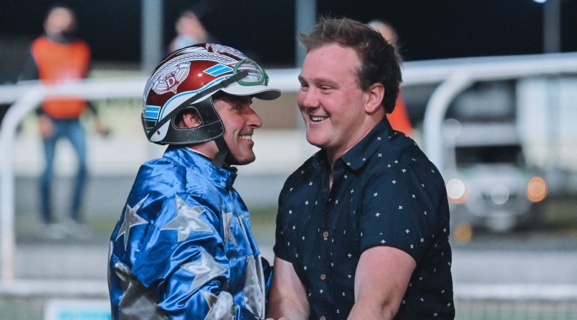 21 September 2021
Nathan to be crucial part of All Stars' Aussie campaigns
Champion trainer Mark Purdon may be preparing to go back to work but that doesn’t mean he is preparing to return to campaigning horses in Australia any time soon. And when he does his son Nathan is set to become a crucial part of that process. Purdon will join former stable foreman Hayden Cullen...