NSW: It's all in the family DAVID Hewitt justly speaks with pride of the achievements of his three sons Brad, Sam and Scott, who are all making names for themselves in the sport.

It appears the entire extended Hewitt family were afforded the talent possessed by their patriarch Tom Hewitt and his legacy is certain to continue for decades to come.

After growing up in the Crookwell area, David moved his family to nearby Goulburn, where the facilities were much more congenial to train horses . . . and they have never looked back.

“I share a barn at the Goulburn track with my eldest son Brad and divide my time between doing my own horses and helping him,” said David.

“Between us we have 25 horses in work, which is a good number to handle.

“Because we are in the same barn, we tend to help each other out.

“It works out well to be able to share the load – it’s just a good family environment.

“Our boys are all handy trainer-drivers and are achieving good things in the sport.

“They work hard and are very professional in how they go about things, which makes us proud.”

David heads to Bathurst on Wednesday night, into territory that has been a happy hunting ground for his brother Bernie since he moved to that harness racing stronghold 19 years ago.

“Yes, Bern has done so well since moving to Bathurst and now his three kids are also doing good things in the sport, which is great to see.

“I am taking a pretty handy team up there and I am happy with where they have drawn.

I do expect all four to run well.”

Hewitt believes Rosscommon Rose is the standout of his runners in Race 1.

“She is very consistent and has been racing in strong company right throughout her career which kicked off with a win first up at Menangle in April last year when she took out a heat of the APG,” said Hewitt.

“I will go forward on her and hopefully find the top – if that happens, I feel she can do the rest and win.

“Raging Sea (Race 2) is a nice horse that I bred and has won four of his eight race starts.

“He is taking a steep rise in grade but from barrier one over the 2260 metre journey he should get a nice trip.”

21 January 2021
Leading international sire on show at APG Sale
Thanks to some outstanding partnerships nationally and particularly in Queensland, APG now has a serious pot of gold ($350,000) in local prizemoney on offer for the graduates of this sale. In addition, an incentive scheme for QBRED-eligible horses sees a first-win bonus set at $12,000 at any age, regardless... 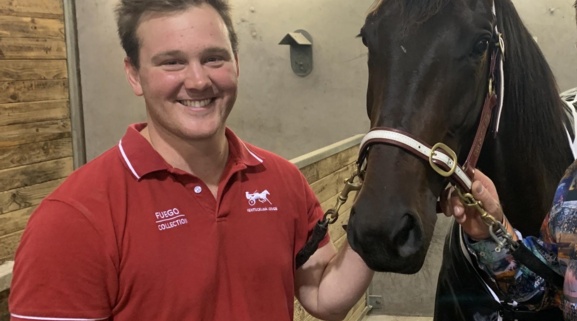 21 January 2021
Young gun Purdon ready to hit ground running
Nathan Purdon is packing his bags and getting ready for the trip of a lifetime. The young trainer is set to leave his home in New Zealand and land here in Australia early next week before setting up his new base at Dean Braun’s Lara property. 21 January 2021
Divinia Bellezza is a Strong Stayer
New Zealand-bred mare Divinia Bellezza has won only seven times from 61 starts, but she looms as a great value bet when she contests the 2536m Subscribe to The West Online Pace at Gloucester Park on Friday night. She is a splendid stayer who has won over 2500m and 2600m in New Zealand and her four runs... 21 January 2021
Babyface Adda Gets His Chance
Boyanup trainer-reinsman Cody Wallrodt is happy with Babyface Adda’s form and is hoping the WA-bred five-year-old will return to the winning list when he starts from the No. 2 barrier in the 2536m Thewest.com.au Pace at Gloucester Park on Friday night. Babyface Adda is a good frontrunner whose...