Last start Breeders Classic winners are back in work.

And being readied for their big assignment.

Vanish Hanover and Big Wheels both scored decisive victories in the Listed $25,550 QBRED Breeders Classic Finals at Albion Park on May 23 and both were given a chance to freshen-up in preparation for the Gr.1 $100,550 QBRED Triad Final next month.

The two-year-old features are scheduled for July 25.

Vanish Hanover, sent north by original trainer David Thorn to Charlie Cini, produced a well-timed finish to take the Fillies feature when downing Talent To Spare and Jasper in a time of 1:56.8 when handled by Brendan Barnes.

Raced by her breeders Murray Cole and Beau Watson, the Hurrikane Kingcole – Vogue Hanover filly has won two of her five starts to date.

Rather than returning to Sydney, connections decided to keep her in the Sunshine State.

“We gave her two weeks off after the Breeders and the focus is clearly the Triad now, she’s back in work and progressing nicely so I’m happy with the ways things are going right now.” Cini said.

Big Wheels led throughout to claim the Colts and Geldings feature when holding off stablemate Justa Little Bit and Glitter Strip in a time of 1:56.8.

Raced by his breeder John Polson, Big Wheels is a gelded son of A Rocknroll Dance from the former talented mare Washington Lass.

Prepared by Chantal Turpin, the talented youngster has won two of his six starts to date.

“We gave him a couple of easy weeks immediately after the Breeders Classic and now he’s back fast working in readiness for the Triad, I’m happy with where he’s at.” Turpin said.

With owners and members allowed back on track this weekend at Albion Park, the much revised winter carnival features commence on Saturday week, July 11. 24 January 2021
In-form Wade Rattray out to continue winning run
Reinsman Wade Rattray is well on the way to claiming his first King Island drivers premiership after notching up his sixth win of the summer season on Saturday. The in-form driver will be hoping to continue on his winning form in Launceston on Sunday, when he takes the reins on last start winner Rockandahardplace... 24 January 2021
NSW: Golden Guitar an open race
WITH scratchings in tonight’s Group 3 Golden Guitar Final at Tamworth’s Carnival of Cups meeting, the race open as the market suggests. The first emergency Ziggy Rocks has firmed into $4 with TAB Fixed Odds after gaining a run in the feature. Meanwhile, Rocknlachlan is the favourite at $3.50... 24 January 2021
NSW: Strong competition in Golden Guitar
TONIGHT’s $30,600 Multiquip Golden Guitar Final at Tamworth is as strong as it has been in the Group 3 event’s history. Three prominent trainers each have two runners in the Golden Guitar after five qualifying heats were held last Sunday, which ensured the strength of the series. In fact,... 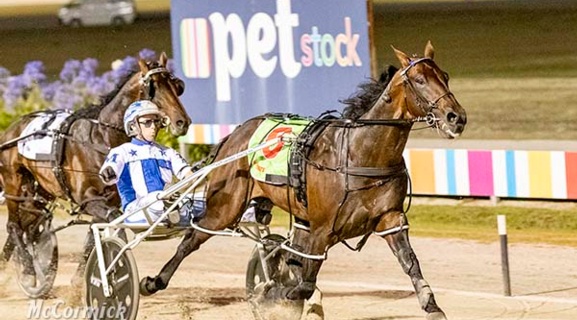 23 January 2021
Ballarat Cup: A masterpiece as Lochinvar Art blisters home
Lochinvar Art proved life’s a breeze at the top of the trots with a commanding victory in the PETstock Ballarat Pacing Cup, pouring home in a 53.1-second last half to claim the $110,000 Group 1. Trainer/driver David Moran was content to go the long way round with his million-dollar pacer, sitting... 23 January 2021
2019/20 Media Awards - Call for Nominations
2019-20 HRSA MEDIA AWARDS – CALL FOR NOMINATIONS HRSA are delighted to announce that Media Awards will once again be included at the Horse of The Year event to be held at the Mawson Lakes Hotel and Function Centre on Friday 26th February 2021. We are calling for nominations for the following categories:...