The Bendigo track played host to a solid card on Saturday night.

The Macedon Ranges district was in the news at the weekend, with Villagem and rank outsider Dallas Jenny both scoring at Bendigo on Saturday.

Eight year old Village Jasper/Amarillen gelding Villagem, a former Chariots Of Fire and Legends victor now under the care of Trevor Monk at Junortoun raced by Monegeetta’s Mick Lingard and son Terry, registered his first victory since September 2012 when successful in the Bendigo Sportsmen’s Association Community Cup Pace for C7 or better class over 2150 metres.

Driven as if he was the best horse in the field by Greg Sugars, Villagem starting from gate three on the second line was sent forward from mid-field three wide racing for the bell to park outside the leader Bluecolla Tigerpie which had also gone forward to cross the Mildura Cup winner Im Blue Double Dee which had taken over from Palais De Louve in a race packed with interest.

Surging to the front on the final bend, Villagem defied all challengers to score from Broadways Best off a three wide trail last lap on the back of Lovable Larrikin, with Im Blue Double Dee third. The mile rate 1-57.3.

Driven by Tooleen based Nigel Milne, Dallas Jenny starting from inside the second line when making her fourth race appearance, came from three back along the markers to gain the day by 1.6 metres in a rate of 1-59.4 over Heavenly Rapture which led. Chestervale Jet finished in third place after trailing the runner up. 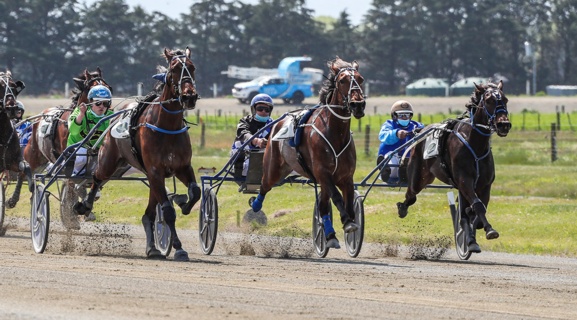